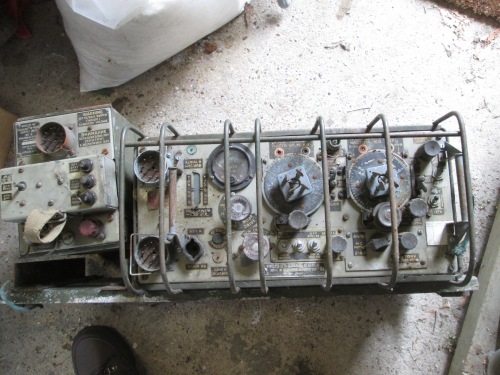 I sold my Wireless Set no 19 this week. In many ways I was sorry to see it go as it was my first “rig”. I had it as a teenager in the late Sixties. It was my introduction to amateur radio as I had it tune Top Band and 80 metres. I listened to stations working on Top Band a lot. The 19 set did tune down to the medium wave as well with a bit of encouragement. Very possibly it was capable of broadcasting music, in AM of course, but I could not say. It was the era of pirate radio after the Wilson Government had outlawed the offshore pirate radio stations.

I was never a Top Band pirate. There were a few around, pretending to be legal radio amateurs. Because it was not so easy to check (we had no QRZ.com in those days) certain individuals used to “borrow” callsigns that would be new as they were issued in order. I guess new legitimate new licensees might have been accused of being pirates if their call signs had been pirated and already been worked by other amateurs.

My 19 set was made in Canada, and had Cyrillic labelling as well as English to suit our then allies.

The 19 set cost me £12.  That was a lot of pocket money. I had got used to seeing other “boat anchors” as the very heavy ex-military sets, transmitters, receivers and transceivers are called. My school ran an army cadet programme and in the “signals hut” there were a number of these sets. Cadets at various schools used to use this equipment to chat. Although I was not admitted to signals section as it was too much in demand to join, I could watch, and that is how I got the radio bug.

It was six or seven years after leaving school that I got my first amateur ticket, by which time I no longer used the 19 set. I believe it has gone to a good home with a fellow radio amateur who enjoys restoring old military radio gear, and who wants it for a militaria exhibition. I hope he enjoys having it.

This entry was posted in Amateur radio and tagged 19 set, militaria, top band, Wireless set No. 19, WW2. Bookmark the permalink.